Christina Koch and Jessica Meir, both Nasa astronauts, are carrying out a spacewalk outside the International Space Station (ISS) in order to replace a faulty battery weighing 105.2kg.

In the process they will become the first female-only team to spacewalk, 54 years since Russian cosmonaut Alexei Leonov first stepped into space.

All of Nasa’s astronauts aboard the station are equipped to carry out the task of replacing the enormous battery, however Koch and Meir were selected to set foot outside the station together.

While Koch has undertaken three previous spacewalks, it will be Meir’s first ever excursion outside the station, and the 221st in the history of the International Space Station. 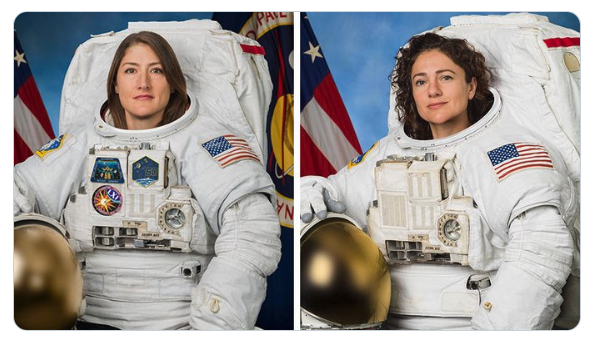 Electrical engineer Koch has been living aboard the station since March, iNews reported, whilst Meir, a marine biologist, joined the crew in September. Both are members of Nasa’s Astronaut Class of 2013.

Koch is set to break another record during her time aboard the station – with an expected stay of 328 days she will set the precedent for the longest single spaceflight by a woman.

Viewers watching the livestream will be able to differentiate Koch and Meir by the differences in their space suits – Koch’s red stripes, whilst Meir’s is unmarked.

Cameras mounted on the astronauts’ helmets show their work in detail as they move around the exterior the station, harnessing themselves to the base whilst they complete the complex task.

The mission is expected to last five-and-a half hours, and if time allows, the astronauts will not only replace the battery but will also adjust insulation around parts of the station, route an ethernet cable, and install a new fitting onto the European Space Agency’s Columbus laboratory module.

The astronauts themselves may be treating Friday’s mission as little more than a maintenance trip, but the world will be watching as they step out into space.

The pair have been wished well by a number of leading scientists and astronauts past and present, including the UK’s Tim Peake who spent six months at the station after launching in December 2015.