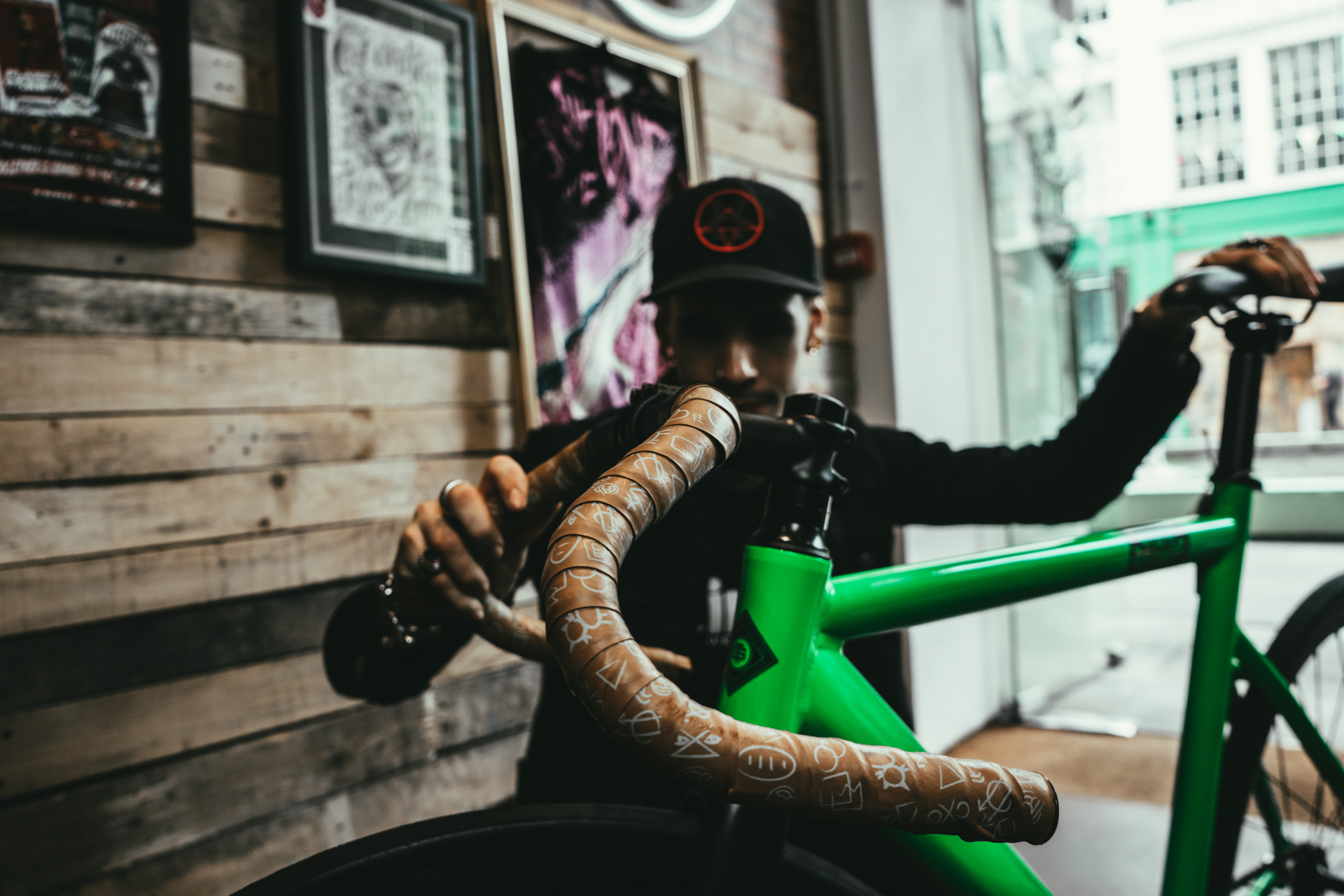 Nestled in the streets of Birmingham’s Custard Factory, the Cranked Cycle Café is one of those business combinations you’d never have thought up on your own: high quality coffee and…bicycles?

This unique custom bike build/café hybrid went from initial idea to physical store in 12 months, casting its doors open in January 2016. We spoke to Greg Heap – the headstrong entrepreneur who single-handedly founded Cranked – about his love of great coffee, cycling in Birmingham, and the ongoing battle between cyclists and drivers.

The name is a play on words, chosen to reflect the vibe of the store:

“The crank is a very central component on a bicycle, it’s also a slang term for relaxing. That correlates with the layout and decor of the store, our ethos, and the way we do business with our customers”.

The idea to interlace custom build services, repairs services and a café came was inspired by a combination of Greg’s passions, along with a determination to challenge the accepted model of the typical bike shop…

“The store combines two of my major passions in life: bikes and coffee, or rather really good bikes and really good coffee. I love the relaxed vibes and quirky décor of traditional European coffee shops, but I hate the way typical bike shops look and feel. They’re very clinical, cramped and somewhat intimidating to some people. I essentially took the elements I liked from both sectors and fused them together under one roof.” 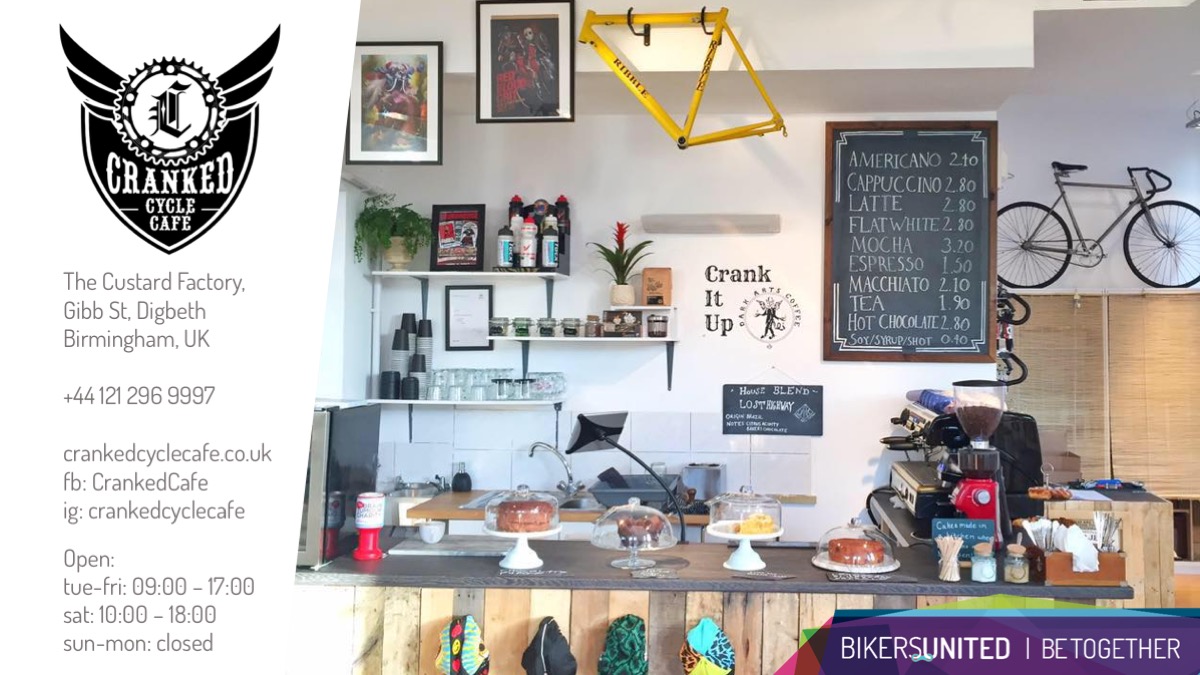 Why a custom build service? The drive came from seeing fellow cyclists pay high prices for bikes, only to pass someone with the exact same model. Greg wants to create “dope bikes that you couldn’t just buy off a rack”; for the same price as one of those identical high street bikes he offers customers something rare and unique, and a guarantee that won’t see 5 other people riding the same thing.

More than just a service, the custom build is meant to be an immersive experience. It is this that sets Cranked apart from the bike stores you may be more familiar with. While elsewhere it may be a case of what’s on display or nothing at all, Greg begins with a frame and allows the customer to be in control, creating something new from a vast range of components step-by-step.

The interaction that customers can expect when designing their own custom bike is personal and informal:

“It’s 100% customer focused. They’re put at the forefront of the designing process and are given full creative control (within reason and budget of course) of what they want from their bike. As experts we’re there to give advice, but we like to give the customer as much free reign as possible. We have a more informal way of doing business, and our customers really gravitate towards that.”

Both function and style are key to the custom bikes Greg creates, but the former always takes precedence for him. “It’s cool to have nice looking stuff,” he explains, but poor quality that doesn’t hold up can be more expensive in the long run. Speaking about the state of production today, he says:

“Style over substance is a major problem across the board, with fashion, electronics etc. all falling prey. When it comes to a vehicle, sacrificing quality for aesthetic value can be lethal. Saying that, I believe that the products we stock find a nice balance between the two.”

Cranked has partnered with some of the best manufacturers from around the world to bring the best bike parts to Birmingham:

“I don’t carry any products that I wouldn’t feel confident using myself, so all the components we stock are of the highest quality, manufactured by some of the most highly respected companies in the world. We are authorised dealers of Cinelli, Campagnolo, Aventón, Dosnoventa, State Bicycle Co. and Chrome Industries, just to name a few. Cinelli are a really cool company, not to mention pioneers of the fixed gear scene. Their collaborative art series’ are always mind blowing. The Mike Giant Ram handlebars we carry are a definite talking point”.

The drive to provide quality encompasses not only the bike parts, but the food and drink too.

Greg describes himself as “an absolute coffee (and food) snob”, and wouldn’t serve his customers anything he wouldn’t have himself. On the coffee front Cranked offers a house blend that rotates every few weeks, along with guest blends from various roasteries. Current offerings include HasBean’s “1973” blend, UK-based Limini and Jackhammer coffee. All this is a far cry from the hastily brewed cup of instant you might expect in the back

All of these guys put out some mind blowing coffee; some of the best you’ll find in Birmingham, believe me. Food wise we serve freshly baked cakes and various other baked goods including pastries and muffins. Everything is homemade and we have new creations in every week. The feedback we receive from customers is amazing, as sadly, there aren’t many places you can visit and enjoy genuine homemade food. Quality is everything, and we’ve definitely got that”.

Along with the unique custom build service, it’s the café that sets cranked apart from other bike shops…

“The café is definitely the stand out piece. The amount of people who have been blown away by the concept of a café within a bike store (or the other way around, depending on how you want to look at it) is pretty awesome. We are also the only bike shop in the area who specialise in fixed gear and track bikes”.

Despite this, Greg insists that all aspects of the business are equally important.

“Everything the store offers stems from great passions of mine. Every aspect plays an equal role in terms of appeal, and if you removed one, the store would lose its magic entirely”.

Greg’s love of bikes was sparked in his childhood, it was until later however, that his interest in the mechanical side of bikes began:

“I’ve been riding bikes since I could walk. It’s always been something that’s given me an immense amount of joy that no other sport could match. When I got a little older I started being more interested in the mechanics of the bikes, as well as the riding aspect. I would spend rainy Sundays just taking my bikes apart and putting them back together, switching out parts, cleaning them etc. This eventually led to me landing a job working for a certain black and orange bike store giant.

I learned a lot while I was there, and although I ended up outgrowing the company, I don’t think I’d be where I am now if it wasn’t for them. Bikes are my life, and I love them all. Everything from BMX, MTB, Fixed Gear, and all the way through to dedicated road bike. Man even unicycles can be cool (sometimes).”

Bad experiences of motorists and disagreements over cyclist’s rights to be on the road, have damaged people’s perceptions of cycling as a sport.

“We get a lot of shit, but thankfully most of it is in good fun. Inevitably though, you’re going to have to deal with some form of abuse and/or ill-informed opinions from the general public. The main problem with road cycling is that people, mainly motorists, don’t understand it. In their ignorance, or arrogance, they believe that we aren’t/shouldn’t be allowed to be on the road on a vehicle that doesn’t possess an engine.

For experienced riders, this is a daily occurrence, and learning how to deal with it is part of the fun, but for newer riders, it can be quite intimidating to have some fat guy in a Range Rover trying to scare you off the road because you’re not going fast enough for his liking.

I think we’re perceived in a similar light to people who ride motorbikes, in that we ‘have a death wish’ and we all ride like maniacs. Yes there are bad cyclists, just like there are bad drivers, but there are plenty of good ones too, and we’re all using the road for the same purpose”.

“We’re huge supporters of the fixed gear scene, which definitely incurs some negative reactions from the public due to the riders’ aggressive style on the road, and the fact that (some of them) choose to ride without brakes. Many fixed gear riders come from BMX or skateboarding backgrounds; which are two sports notorious for causing conflict between the riders and pedestrians. I believe that fixed gear riding falls into the same category as skateboarding and BMXing, in the way that no matter how much it’s pushed into the media spotlight, it will always be an underground sport that carries a reputation that probably won’t ever be shaken. That’s how we like it though”.

According to Greg, there’s a lot that can be done to improve the accessibility and safety of cycling in Birmingham:

“Terrible. It’s hands down the worst city (centre) I’ve ever ridden in. There’s no cycling accessibility in central Birmingham, and the surrounding roads are littered with potholes, or cycle lanes that simply aren’t practical. The council need to spend less time building tow paths and take a look at making our roads safer. Saying that, there are areas such as Lichfield or Sutton Coldfield that actively welcome cyclists and are a pleasure to ride through”.

Perhaps, as cycling becomes more ubiquitous and businesses like Greg’s become more commonplace, the cyclists of Birmingham might see some change.

To find out more about Birmingham's Creatives go to http://www.new-urban.co/

Photography by Valdez The Photographer.