So in 2013 Rianna signed up to Slenky, trying to figure out which of her many passions to focus on and build a future around. Along with other students from St. Charles' school in London, she took a shot at Sky Studios and quickly made a decision.

Rianna was now clear she'd study Film and Media at uni and, ahead of getting a place sorted, applied to get involved in a Slenky + Sony mash up exploring the industry, getting shots at Pinewood Studios and other organisations, and picking the brains of industry stalwarts such as Robin Vidgeon.

One of those shots was with Havas Media, a global business that had already proven itself genuinely supportive of young passions - giving shots to Jonathan Fernandez and Jack Carr. Rianna joined another shot-taker, Phelan, on a pretty unique work experience gig on set filming a Citroen advert.

It all rolls in and adds up and ahead of graduating this summer the London Evening Standard heard of Rianna's use of social media to connect with her passion and ran a short feature. 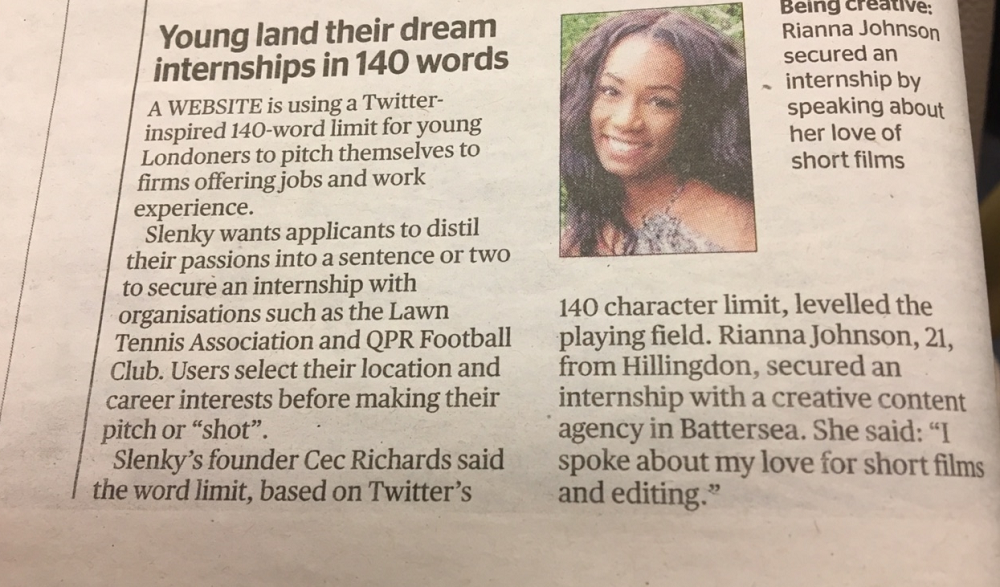 A few hours after publishing a TV channel offered an internship at the end of the summer, after graduation and a well-earned holiday but, not one to sit back, Rianna made it happen again...

We're extremely proud of Rianna and the wee part Slenky's played to date. No doubt Rianna will stay in touch as one of our most loyal ambassadors and a truly authentic example for others of how to take your shot. We''re particularly delighted that the advertising industry is modernising, looking further afield for future talent and we're throwing BIG love at Havas for their continued appetite to give young people a shot. Walking the walk guys... nice one.