In 2014 Sunjay was running his website 'Hip Hop Drome' from Handsworth when he took his shot at music with Slenky and Sony.

However, unlike many others, Sunjay didn't want to take the mic or even drop the mic but had his eyes on what goes on behind the scenes. Sunjay took a series of shots to quickly upgrade what he already knew or thought he knew about the industry, meeting people in different companies and roles to get a 360-degree view and plot his entry point.

One of his Sony shots was at Live Nation - one of the worlds largest concert and live entertaiment companies.

In June 2017... Sunjay brought a massive smile to the faces of his family at Slenky when he announced he was due to start on his career - at Live Nation... So a trip down memory lane was needed - to see how a fresh-faced 18 year-old turned his passion in a role at one of music's big players in just 3 years...

It all started with a video...

Sunjay then went on a series of Sony shots, creating a series of short Hip Hop Drome films to share what he'd learned with others passionate about hip hop and music.

We're mad proud of what Sunjay's achieved but we're also really pleased to count him in our corner, a top guy and welcome face popping into the office and definitely an Inspiration. 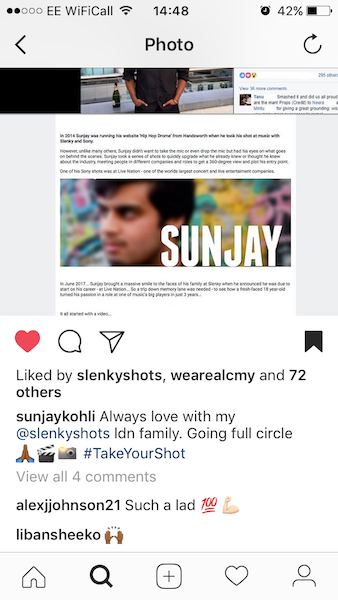 Nice one Sunjay - Take Your Shot!